July 11, 2008
Nearly after one year I again tried to install GNU/Linux on my desktop. Last week I have installed Ubuntu-8.04 in my friend's machine and the desktop was really appealing. So, this time I decided to install the bleeding edge Fedora 9 in my machine.

I have managed some free space in the machine and installed Fedora without much hassles. The installation was very quick and it took almost 40 minutes to complete. Since I was not a casual GNU/Linux user, I ran into a couple of issues. First problem was with the Interrnet configuration. Later I discovered that the DNS address that I gave was wrong. The new Fedora theme and the package manager was wonderful. I added the livna rpm repository and installed my favourite VLC media player. Another great feature is the Malayalam support - after some minor tweakings from SMC, I was able to read and write Malayalam in OpenOffice.org and Mozilla Firefox. Things were smooth until I rebooted the machine next time.

When I reboot the machine, I was again struck with the network problems. This time the configuration was alright, but the NetworkManager has some fatal issues. It always shows Network not connected :(

I tried everything I know - reconfigured the network, rebooted the machine, modified the configuration files, but unable to connect to the network. I have no chance to search and find a solution as I have no connectivity and at last I have to logon to MS Windows ...

After some tedious search I got the solution(Sorry, I forgot to bookmark the link) and copied the page contents to a text file and again logged into the Fedora desktop. It says that desktops with a wired network, doesn't need the NetworkManager service. To increase the usability, in Fedora 9 the older network service is disabled by default.

To switch to using the old network service, I followed the following steps.

First disable the NetworkManager and prevent it from automatically loading:
You can also run the setup command and turn the NetworkManager off by pressing the
You should have an eth0 device already showing. To configure the IP settings click on Edit. Set the DNS address and then Save the settings.

Next, enable the service :
Make sure it loads at next boot: (You can also use the setup command)

Now I was able to connect to the Internet and post my first blog about Fedora. :)
fedora Linux network manager

Unknown said…
While this helped, I noticed that system-config-network also had a check box on the General Tab that need to be checked to be controlled by Network Manager. Being a command line type, I found this frustrating that I had to use a gui to fix a problem. Also, where are the configs stored?
8:24 PM, September 07, 2008

Coder928 said…
The network configuration files are located in a number of places:

libregeek said…
I have experienced similar problem in Fedora 10 also.

In my case, NETMASK provided through system-config-network didn't got saved in the config files.

September 05, 2011
As i told earlier am trying to switch to Flex , i am trying to learn connection between PHP and Flex. When searched i got a excellent tutorial . But the problem is that it uses PostgreSQL. As i don't have any prior experience in PostgreSQL i try to install it in my Windows 7 and configure it in WAMP . I got different errors and spend almost two days in searching and using different methods . Atlast i got it right. I will try to figure out the steps i have done. Am using PostgreSQL 9.1 WAMP Server 2.0e phpPgAdmin 5.0.2 WAMP consists 1. Apache Version :2.2.17   2. PHP Version :5.3.5  3. MySQL Version :5.5.8 First install PostgreSQL , no need to install additional plugins like phpPgAdmin. Install WAMP server where ever you need. Download PhpPgAdmin  and unzip it to WWW folder in WAMP installation. At this point if you try to access the http://localhost/phpPgAdmin/ you may get this error. Your PHP installation does not support PostgreSQL. You need to recompile
Read more 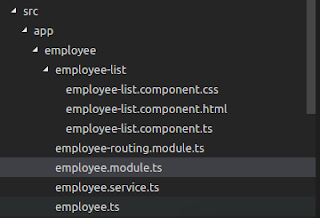 In the previous post we created a new Angular 4 project. Lets check the how to add modules, components and routing. You could check out the code from here . git checkout -b part2.0 origin/part2.0 We are going to use bootstrap styling . So lets add bootstrap in our aplication . We are going to use only styling not the components. npm install bootstrap@3 We need to add the bootstrap stylesheet in tha .angular-cli.json. "styles": [ "../node_modules/bootstrap/dist/css/bootstrap.min.css", "styles.css" ], Our first Module Lets add a new module employee.  Inside "src/app" run ng generate module employee or ng g m employee Wait we are going to lazy load this module , so we need routing inside the module, right? So we are going to create the routing also. ng g m employee --routing Time for component It will create new employee module with its own routing.   lets add a component for listing the employee. S
Read more